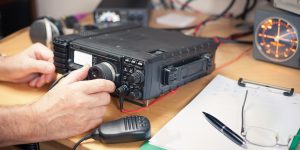 In the immediate aftermath of a natural disaster, local infrastructure such as cell towers, power lines, and telephone and internet cable are often damaged or destroyed, limiting the ability for responders to share data and access the internet. With more organizations moving to a cloud-first IT strategy, the ability to bridge applications running in the cloud and tools operating at the edge is a key requirement for creating solutions that allow responders to operate effectively in these challenging environments.

Recently, the Amazon Web Services (AWS) Disaster Response team conducted a field testing operation designed to replicate a common disaster response scenario. Held in Northern Virginia, it included forward-deployed field locations (at/near the disaster site) and a headquarters location (HQ) that was more than 25 miles away. The field sites had minimal working infrastructure and no cellular or internet connectivity, and the HQ was an office building with standard internet access and stable infrastructure. The goal of the exercise was to establish an ad-hoc network at the field sites that allowed team members to collect and process data at the edge, as well as create a link between the field site and HQ using the Amateur Radio Emergency Data Network (AREDN) to provide access to cloud-based resources in the field. 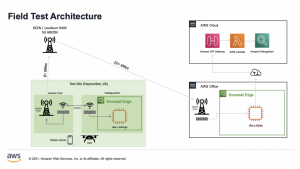 Amateur radio operators, widely referred to as ‘hams,’ have a long history of providing communications support to communities during disaster response efforts. The field testing operation was no different: four licensed AWS amateur radio operators demonstrated how inexpensive and readily available radio hardware can be configured to use AREDN to provide connectivity between the edge site and the HQ location. By using commercial off-the-shelf hardware, the AWS team simulated real world response conditions, where hams bring equipment into the field to re-establish connectivity for disaster response teams.

AREDN is an ad-hoc radio frequency (RF) mesh networking application that allows amateur radio operators to share applications and data via long distance RF communications over miles. A mesh network is a local network topology in which multiple nodes and devices connect together directly, dynamically, and without hierarchy to as many other nodes as possible to build a reliable, self-configuring communications network. The AREDN mesh is self-healing, meaning that if a node is removed from the network, the remaining nodes automatically reconfigure themselves to maintain connectivity across the network—this is a key feature driving the increasing popularity of AREDN for emergency response connectivity. AREDN uses widely available, low cost commodity hardware to establish 2.4 and 5ghz point to point links between stations. Each node on the mesh provides network connectivity to share compute resources with remote users. In the case of the test exercise, the goal was to set up one AREDN node at the HQ office building and another node at the field location, both of which could connect to other existing AREDN nodes in the Northern Virginia area and ultimately enable the transfer of data between the two sites.

How we built it

Like real world scenarios, the team had to operate within physical limitations of the test location, a rural 25 acre site with mixed terrain. The AWS Snowball Edge device requires a commercial power source, but the location that had power was not viable to establish RF communications via AREDN. To run the Snowball Edge Compute Optimized, which served as the main data storage and processing hub in the field, the team split the field command center into two sites: one near the power source to run the Snowball Edge, and a second “communications hub” that was powered by a solar generator (eg. solar panel combined with a battery). The communications hub had line of site to an existing AREDN node that was part of the Northern Virginia AREDN network, as well as line of site back to the primary command center site with the Snowball Edge. The two sites were bridged together wirelessly using commercial long range outdoor WiFi access points, which also provided local area network connectivity to users and devices operating at the field site.

A second AREDN node was set up at the office HQ location, which also had line of site to the existing northern Virginia AREDN nodes, enabling the relay of data between the headquarters and field locations over the AREDN mesh. A second Snowball Edge Compute Optimized device was deployed at HQ and connected to both the AREDN mesh network and the internet. This allowed us to serve applications to users on the AREDN mesh, including endpoints that could proxy data and requests from the field that came in over AREDN up to cloud-based resources over the internet. Results were returned to users in the field over AREDN.

Once the necessary equipment was set up and configured at each location, the team collected a variety of diagnostic metrics to evaluate the network performance of both the local WiFi and AREDN links. At the field site, the wireless link between the command center and communications hub delivered up to 400 mbps of bandwidth, and team members were able to connect to the local wifi from nearly 0.6 miles away from the access point. The AREDN link between the field site and the headquarters office building provided over 15 mbps of throughput, which was sufficient to transfer images, voice, and text data in near real time.

With the network established and tested, the team began exercising several scenarios common during disaster response operations. The first scenario focused on establishing a text-based chat capability, called Rocket.Chat, that team members in the field could use to communicate with each other, as well as remote members located at the HQ building. A Rocket.Chat server was deployed to the Snowball Edge at the HQ location and configured as a discoverable application on the AREDN mesh network. Users were able to successfully access Rocket.Chat, create accounts, and chat with each other in real time while connected to the local WiFi at the field site. Using the same pattern, the team also deployed Etherpad, an open source note taking and document writing app that allows users to edit documents collaboratively in real time.

The team also developed a custom containerized web application to perform computer vision tasks using Amazon Rekognition, a machine learning (ML) service that detects and labels objects in images and video. The app was hosted on the Snowball Edge at the HQ location, which successfully connected to send images to Amazon Rekognition for object detection (see Figure 2). Users at the field site were able to upload photos from a variety of devices including mobile phones, UAV platforms, and laptops. Over the course of the operation, the team collected feedback from users and tuned the application architecture continuously at the edge. For example, the team reduced the total end-to-end response time by using the Snowball Edge device in the field to pre-process, or downsize, images, to minimize upload times over the bandwidth-limited AREDN links.

By the end of the two day exercise, users experienced about 1.5 second end-to-end response times for large raw images (10Mb+), which included images taken during live UAV flight operations. The ability to connect workloads in the field running on AWS Snowball Edge, with pre-trained artificial intelligence (AI)/ML services in the cloud via ad-hoc networks like AREDN gives response organizations new options when connectivity is limited.

Learn more and get started

To get started, learn more about the AWS Disaster Response Program and the Snow family of edge devices. AWS offers multiple programs for nonprofits to get started on the cloud, including the AWS Nonprofit Credit Program, which helps organizations offset the costs of implementing cloud-based solutions. Apply for the AWS Nonprofit Credit Program to start your journey with AWS.